Why are Electric Costs Increasing?

For over the last 10-15 years, the average electricity prices for Hoosiers has increased for two primary reasons: sales are flat or decreasing, and investor-owned electric utilities have made significant investments in:

Electricity Prices for Customers Have Increased Over Last 15+ Years

Industrial Rates. According to data from the U.S. Energy Information Administration, which includes data for investor-owned, municipal, and electric cooperative utilities, average industrial electric rates in Indiana were the 11th lowest in the U.S. in 2001 at 4.11¢ per kilowatt hour (kwh). In 2018, Indiana’s average industrial rates were the 29th lowest at 7.16¢ per kwh – a drop of 18 places and a 74% increase. Kentucky (82%) experienced the largest increase in the region. Also, Ohio (57%), Illinois (43%), and Michigan (43%) also experienced increases in their average industrial electric rates larger than the national average (37%). 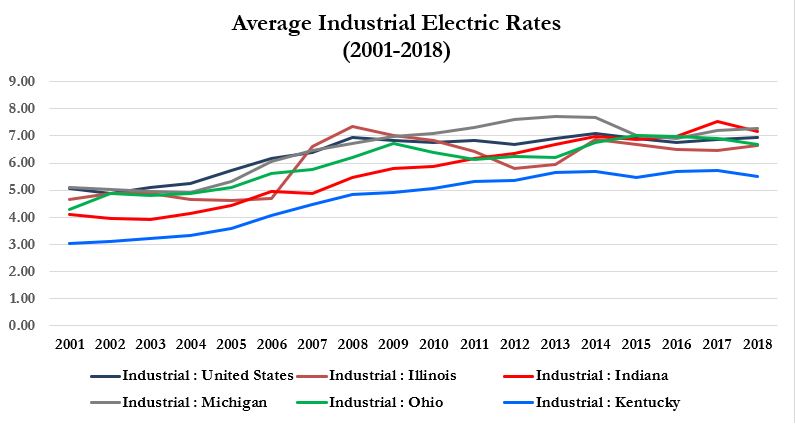 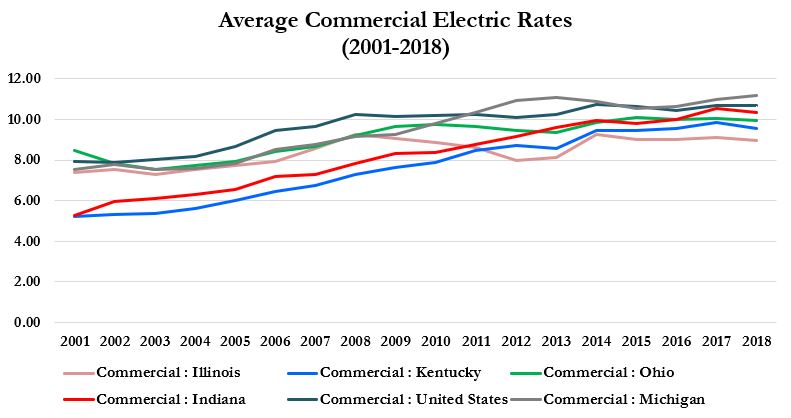 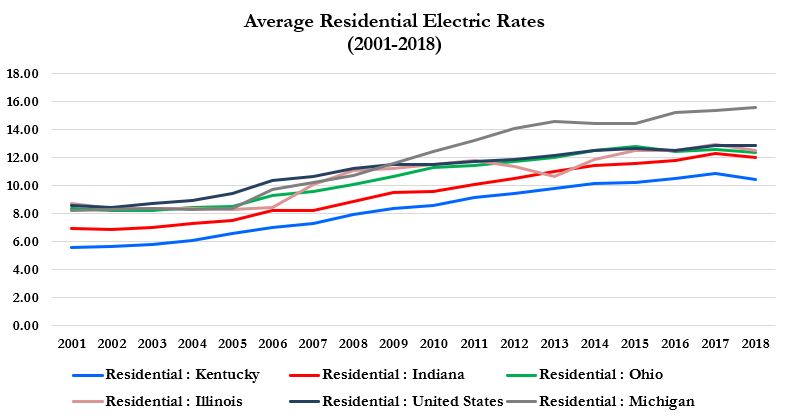 The electric utility industry is among the country’s most capital-intensive sectors, with many of its costs stemming directly from investments in and maintenance of the power plants, transmission and distribution lines, equipment, and structures that are used to deliver electricity. Money spent by a utility to provide electricity falls into one of two categories: expenses and capital investments.

According to data gathered by the Indiana Department of Environmental Management (IDEM), those investments in pollution controls and cleaner coal technology have resulted in a significant reduction of potentially harmful emissions in Indiana since 2001. 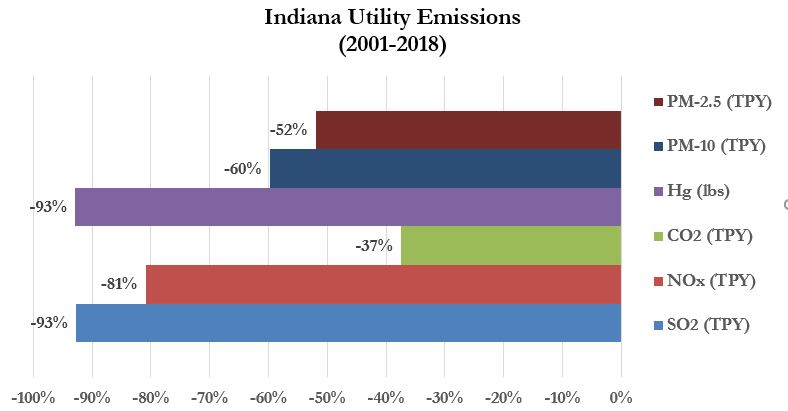 Indiana electric power sector is using more and more natural gas to generate electricity. In fact, natural gas use in Indiana has skyrocketed. Since 2006, natural gas deliveries to electric power sector in Indiana increased over 580 percent – 27,213 million cubic feet (MMcf) in 2006 to 185,155 MMcf in 2018. Why? There has been a significant drop in natural gas prices for electric power generation during that time period. According to the U.S. Energy Information Administration, natural gas prices have dropped over 50% ($7.11 per thousand cubic feet in 2006 versus $3.52 per thousand cubic feet in 2017). The chart below illustrates the significant drop in the price of gas used by electricity generators (regulated utilities and non-regulated power producers) whose line of business is the generation of power. 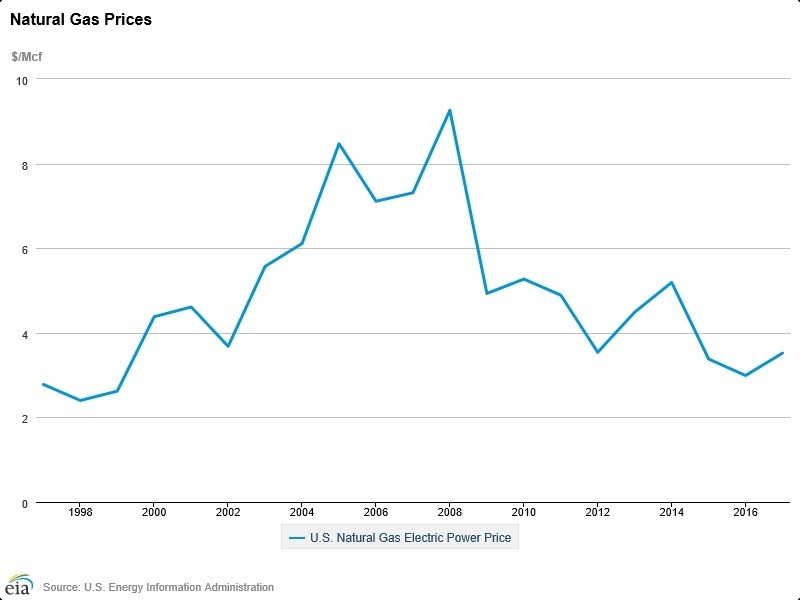 The following chart, which is data gathered from the Indiana Utility Regulatory Commission (IURC), illustrates the significant transition away from coal to natural gas and other sources of fuel since 2008. 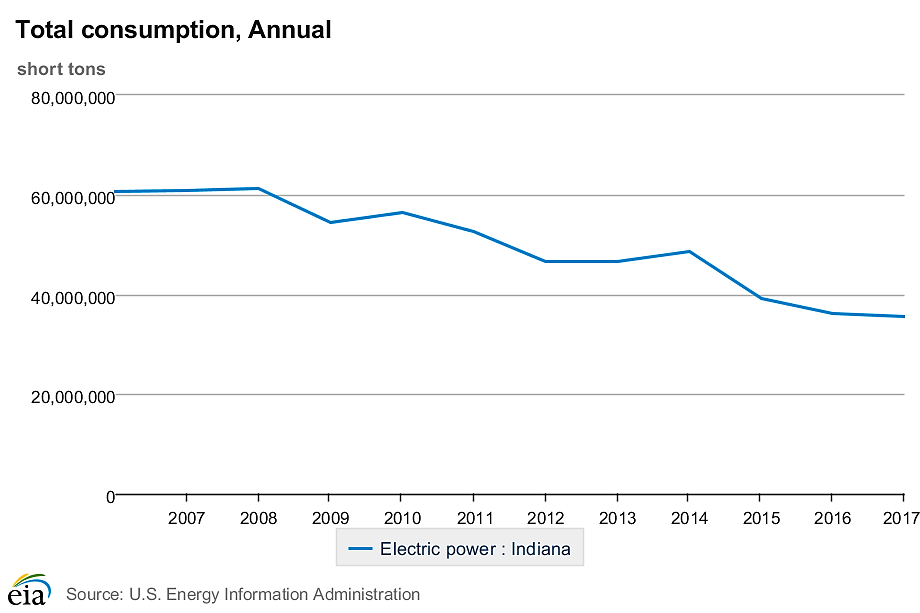 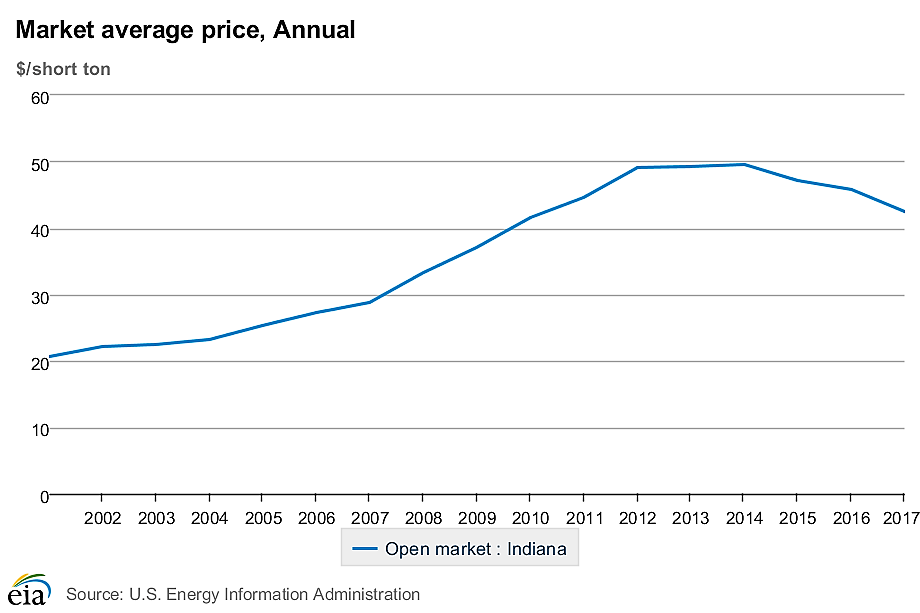 Decrease in Sales of Electricity

Sales of electricity to industrial customers have decreased 6% in Indiana over the last 12 years.

To determine the average electricity price, the basic utility ratemaking formula is:

According to Federal Energy Regulatory Commission (FERC) Form 1 data for the five investor-owned electric utilities in Indiana, overall retail sales of electricity since 2006 decreased over 2% in Indiana (6% decrease in sales from industrial customers) while costs and capital investments, including a fair return, increased 38% (33% allocated to industrial customers).