In 2015, in Michigan v. EPA, the United States Supreme Court ruled that EPA had erred when, in promulgating the MATS rule, the EPA determined that, while it was permitted to consider costs when making the “appropriate and necessary” (A&N) Finding, the EPA was not required to consider cost. The Court remanded the MATS rule back to the EPA — while leaving the rule’s hazardous air pollutant (HAP) emissions standards and other requirements in place — and instructed the EPA to address the identified deficiencies in the A&N Finding. On December 28, 2018, the EPA released a proposal to revise MATS cost finding and “risk and technology review”. https://www.epa.gov/newsreleases/epa-releases-proposal-revise-mats-supplemental-cost-finding-and-risk-and-technology.

According to the Energy Information Administration (EIA), between January 2015 and the rule’s April 2016 compliance deadline, 87 GW of coal-fired plants in the United States installed pollution control equipment, and 20 GW retired (but 186.6 GW of the then 276-GW national coal fleet had reported no changes—and it is unclear if these units shut down or are factored into planned retirements). About 26% of the 20 GW of retirements during those two years occurred by April 2015, presumably to meet the rule’s initial compliance date.

Between 2014 and 2016, power generators invested an estimated $6.1 billion to comply with MATS or other environmental regulations, according to the National Coal Council (NCC). A number of facilities implemented a combination of control technology such as flue gas desulfurization scrubber systems, selective catalytic reduction systems, and fuel additives. 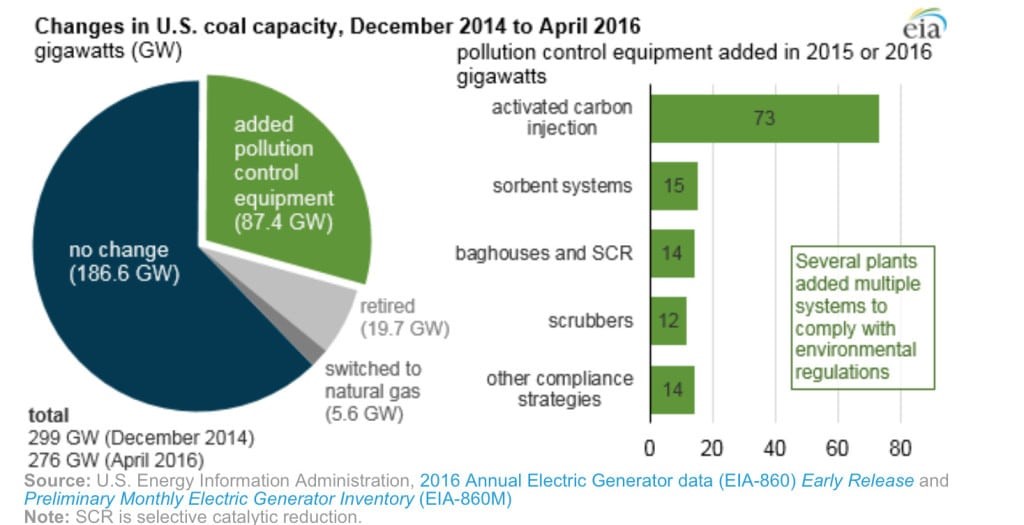 MATS compliance costs are estimated to have exceeded $1 billion for IEA member companies and played a role in the closure of several coal-fired electric generating units in Indiana.