Effluent Discharge Guidelines are national wastewater discharge standards that are developed by EPA on an industry-by-industry basis. These are technology-based regulations, and are intended to represent the greatest pollutant reductions that are economically achievable for an industry. The standards for direct dischargers are incorporated into National Pollutant Discharge Elimination System (NPDES) permits issued by States and EPA regional offices, and permits or other control mechanisms for indirect dischargers (see Pretreatment Program).

Steam electric plants use nuclear or fossil fuels (such as coal, oil and natural gas) to heat water in boilers, which generates steam. The steam is used to drive turbines connected to electric generators. The plants generate wastewater in the form of chemical pollutants and thermal pollution (heated water) from their water treatment, power cycle, ash handling and air pollution control systems, as well as from coal piles, yard and floor drainage, and other miscellaneous wastes.

See here for more information from the EPA: https://www.epa.gov/eg/steam-electric-power-generating-effluent-guidelines 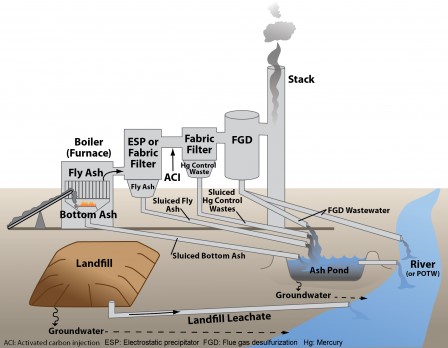